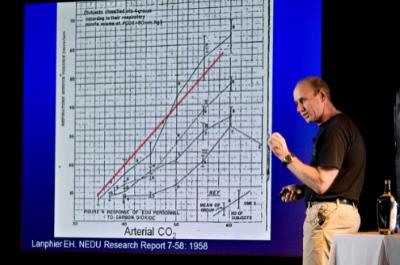 Professor of Anaesthesiology, School of Medicine, University of Auckland

Simon is a physician and scientist with specialist training in diving / hyperbaric medicine and anaesthesiology.  He is widely published with over 160 papers or book chapters. He co-authored the 5th edition of “Diving and Subaquatic Medicine” and the hyperbaric and diving medicine chapter for the last three editions of Harrison’s Principles of Internal Medicine. He has twice been Vice President of the Undersea and Hyperbaric Medicine Society (USA) and in 2010 received the society’s Behnke Award for contributions to the science of diving and hyperbaric medicine. He has performed substantial research on patient safety in the operating room.

He now works as a consultant anaesthetist at Auckland City Hospital, and Professor in Anaesthesiology at the University of Auckland. He provides on-call cover for diving and hyperbaric emergencies at the North Shore Hospital Hyperbaric Unit in Auckland.

Simon assumed the role of Editor-in-Chief of Diving and Hyperbaric Medicine Journal in January 2019.

Simon’s diving career has included more than 6000 dives spanning sport, scientific, commercial, and military diving. He has been a lead member of teams that were the first to dive and identify three deep wrecks of high historical significance in Australia and New Zealand. At the time of one of these dives (2002) the 180m depth represented the deepest wreck dive ever undertaken.

He was elected to Fellowship of the Explorers’ Club of New York in 2006, and was the DAN Rolex Diver of the Year in 2015.

His most recent expeditions were Truk in November 2019, the Pearse Resurgence cave (New Zealand) in February 2020, and a New Zealand project to take arterial blood gas specimens from an elite freediver at 60m in February 2021.